When I wrote The Language of Emotions, I had not yet found a concise definition of emotions anywhere, so I sort of tap-danced around the issue and dove into my own empathic view of emotions as unique messengers that carry specific gifts. But I read a wonderful book last year that presented the perfect definition: emotions are action-requiring neurological programs — and I relied upon this definition in my newest book, The Art of Empathy. It is an absolutely magnificent frame through which to view emotions! 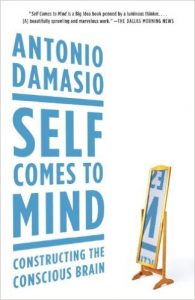 This definition comes from neuroscientist Antonio Damasio’s book, Self Comes to Mind: Constructing the Conscious Brain. It’s a good, though quite involved read, in which Damasio lays out some theories of consciousness, based on his work as a research scientist. How does a brain create a mind? How does the mind create a self? What are the connections between wakefulness, consciousness, mind, and self? Can you be awake but not conscious? (Yes, for instance, in epileptic “absence” seizures, where you can be walking around but have no conscious awareness of anything you’re doing, and no memory of anything you did during the seizure.)

After he walks us through many different conceptualizations of consciousness, Damasio puts forth the hypothesis that true self-aware and other-aware consciousness cannot occur without emotions. It is only when we feel emotions and have emotional awareness of our surroundings, Damasio asserts, that we can be said to be conscious. Otherwise, we might just as well be sleepwalking.

Wow, I don’t know about you, but when I was growing up in the New Age, emotions were seen as a hindrance to consciousness — because emotions were allegedly “lower” than intellectual or spiritual ideas. Only joy and happiness were supported — everything else was trouble. I fell for that idea as a pre-teen, but I quickly saw that the idea was deeply flawed, and that people can’t actually function at all if they try to live above, without, or in spite of their emotions. Emotions, I felt, were central to every aspect of thinking and behavior — but I was completely alone in my view, and I needed to study interactions, emotions, and empathy for many years in order to flesh out my impressions and hypotheses.

It’s wonderful, after a lifetime of identifying the positive purposes of emotions on my own, to read all of the new research about emotions and their importance to memory, learning, thinking, decision making, and now consciousness and self-hood (and, of course, intellectual and spiritual ideas) … wow.

I saw clearly throughout my time in the New Age that denying nearly all emotions (or treating them as problematic) meant that people didn’t learn much about them (except that they were to be avoided). People around me tried to live above, in spite of, and without emotions so that they could be more spiritual or more clear, but their efforts didn’t bear fruit. In theory, living without emotions might seem at first glance to be an interesting idea, but in reality (where emotions are integral to thinking, learning, socialization, memory, and consciousness) trying to live without emotions is just silly talk. However, I’m grateful for that silly talk, because it provided me a wonderful living laboratory for my early research into emotions.

Because emotions are action-requiring neurological programs

Each emotion is an action-requiring neurological program, and in The Language of Emotions, I worked to explain what each emotion is for and how to work with it as itself (rather than trying to transcend or avoid it). In this excerpt from Self Comes to Mind, Damasio talks about the universality and reliability of emotions [I’ll bracket my explanations of Damasio’s terms]:

“Emotions are present even in cultures that lack names for the emotions … The universality of emotional expressions reveals the degree to which the emotional action program is unlearned and automated. The execution of the same emotion can vary from occasion to occasion but not enough to make it unrecognizable to the subject or to others. It varies as much as the interpretation of Gershwin’s “Summertime” can change with different interpreters or even with the same interpreter on different occasions, it is still perfectly identifiable because the general contour of the behavior has been maintained….

The fact that emotions are unlearned, automated, and predictably stable across action programs [emotional responses] betrays their origins in natural selection and in the resulting genomic instructions [genetic inheritance]. These instructions have been highly conserved across evolution and result in the brain’s being assembled in a particular, dependable way, such that certain neuron circuits can process emotionally competent stimuli [anything that evokes an emotion] and lead emotion-triggering brain regions to construct a full-fledged emotional response.

Emotions and their underlying phenomena are so essential for the maintenance of life and for subsequent maturation of the individual that they are reliably deployed in early development [all normally-developing human infants are born with specific emotions intact, and then develop further emotional responses at dependable stages].” From Self Comes to Mind, pp 123-124 [emphasis mine].

This information is so wonderful. So many emotions are pathologized, and we’ve got endless instructions about how not to have the allegedly negative ones, or how to have the allegedly positive ones all day long. But that’s all bunk. It’s much more helpful to approach emotions as necessary aspects of memory, learning, socialization, interpersonal skill, intellect, consciousness, and self-hood.

It’s so helpful to understand emotions as action-requiring neurological programs, because it means that you get to decide which action (out of thousands) you want to take. It also really lifts away the stain of pathology that has been placed on emotions for so many centuries. Emotions are necessary, they’re intrinsic to cognition and behavior, and they’re reliable.

I also organize each emotion into three levels of intensity (there are many levels of intensity for each emotion, of course, but I created three large categories for simplicity’s sake). So each emotion has a “lite” or flowing state, where it’s monitoring your environment and your behavior so subtly that you often won’t even know it’s there; a mood state, where pretty much everyone can identify it; and an intense state, where the emotion is highly activated. (See this free Emotional Vocabulary List for excellent ways to describe these states to yourself and increase your emotional awareness.)

So let’s look at some emotions as they move into your awareness — in terms of the gifts they bring you, the actions they require, and the states they move through.

A snake crosses your path, and your fear mood-state program starts. You take action to avoid the snake (or pick him up gently and get him out of harm’s way, or any number of other responses), and your fear recedes. The action has been completed, and there’s no longer any reason for fear to be present in its mood state. It can down-regulate to its calm and watchful flowing state (where you probably call it your instincts and intuition) until you need it again.

Or perhaps some guy calls you a jerk, and your anger program starts. You take action to repair the damage: you could yell, but that would just start a war; you could ignore him if that’s the best idea; you could lean into the relationship and ask him to explain his behavior (if you want the protect his sense of self and move the relationship to a new place); or you could laugh and defuse the intensity. Whichever action you take will complete the program (okay, fighting back will require a new and more intense anger response , and you could get into trouble, but we talk about that in my book). When you’ve completed your anger program, your anger will down-regulate to its flowing state, where it subtly helps you maintain your voice, your standpoint, and your self-image without offending against others. 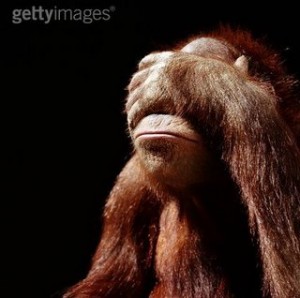 Or perhaps you move toward a bad habit or you’re about to say something really insensitive, so your shame program moves into its mood state (this example involves authentic shame — which means that it tracks to something you honestly feel ashamed about; this shame is not an aspect of enforced social control).

Shame brings its own actions; it fills you with heat, flushes your face, and stops you cold, because you’re about to do something potentially injurious. Your job is to check in, think about your next move, and hopefully stop yourself from doing it. If you don’t, your shame program may intensify, or other emotions may come forward, depending on your relationship to shame (such as depression, apathy [I don’t care; I do what I want!], fear, and so forth). When you complete the correct action for your shame and amend your behavior, it will down-regulate to its flowing state, where it subtly monitors your behavior and your treatment of yourself and others.

Each emotion has its own action-requiring program, and though there’s a tremendous amount of nuance and individual tweaks to how each of our emotions work and interact, every emotion is “perfectly identifiable,” as Damasio writes.

Reliable, but not always simple

In my above examples, I purposely chose simple instances where the emotions were appropriate to each situation. As we all know, this isn’t always the case. In my book, I talk about each emotion in terms of its purpose, your possible responses, and how to know if an emotion is out of kilter. For instance, if you feel mood-state fear all the time, even when nothing new, novel, or dangerous is near you, that’s something that needs to be checked out. Fear programs aren’t supposed to be running at their mood-state all day long; it’s exhausting!

Or if every blasted thing makes you angry, even if no one is specifically insulting you, that’s something that needs to be checked out, too. Your mood-state anger program shouldn’t be running all day long. Actually, no emotion should be running at full mood speed all day long. Each of your emotions has its own job to do, and the jobs are very specific. If you need some support with emotions that are requiring actions from you all day and all night (!), this post may be helpful: How much emotion is too much?

My happiness and contentment programs are delightfully activated by Antonio Damasio’s work on consciousness and action-requiring neurological programs. His work and his wonderful definition made the writing of The Art of Empathy so much easier!