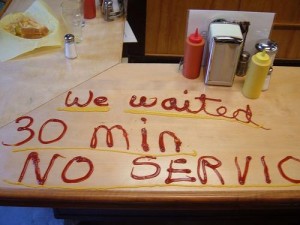 Are you dealing with Passive-Aggressives? These people fall through on their promises and responsibilities and then blame everyone and everything but themselves. They also have the charming tendency to blame you or bring up grievances when you call them on their non-performance. What is going on with these people?

Passive Aggression was once seen as a mental illness or personality disorder, but further research showed that we all use passive aggression when we’re faced with unpleasant tasks or authoritarian structures. Sometimes, it’s not possible to be assertive; sometimes, you gotta perform a little passive resistance.

However, there are people among us who take passive resistance to new heights; they tend to use it as a life strategy rather than a momentary choice.

Wikipedia has a good description of the behavior:

Passive–aggressive behavior, a personality trait, is passive, sometimes obstructionist resistance to following through with expectations in interpersonal or occupational situations. It is a personality trait marked by a pervasive pattern of negative attitudes and passive, usually disavowed resistance in interpersonal or occupational situations.

It can manifest itself as learned helplessness, procrastination, stubbornness, resentment, sullenness, or deliberate/repeated failure to accomplish requested tasks for which one is (often explicitly) responsible.

About.com also has a good article on passive aggression:

Passive Aggressive behavior is a form of covert abuse. When someone hits you or yells at you, you know that you’ve been abused. It is obvious and easily identified. Covert abuse is subtle and veiled or disguised by actions that appear to be normal, at times loving and caring. The passive aggressive person is a master at covert abuse.

My mother referred to this behavior as “The tyranny of the weak.” Great saying, Ma! But it’s also emotionally revealing, because a passive aggressive person is someone whose relationship to anger is twisted (which is why they’re weak), and sadly, that problem means that the rest of their emotions will be twisted as well (and here comes the tyranny!).

In The Language of Emotions, I placed anger at the very front of the line (see The Gifts of Anger), not just because it’s a primary emotion, but because it’s the emotion that sets the tone for all of your other emotions. Anger sets boundaries for you, it helps you identify your place in the world, and it helps you protect your sense of self. If you work well with with your anger, you’ll tend to work well with the rest of your emotions too.

Anger faces outward and protects you from anything untoward coming in, while shame faces inward and protects the world from anything untoward coming from you. If you’re working well with your anger and shame, your behavior will be appropriate, assertive, considerate, and reliable. Fascinatingly, if you’re working well with your own anger and shame, people tend not to mess with you — not because you frighten them, but because you don’t have any cracks in your armor, and there’s nothing in you that invites abuse. If people behave improperly around you, you’ll be able to raise an eyebrow, laugh compassionately, or take them aside and check in with them, and they won’t do it again.

So, let’s look at the opposite situation, where you don’t have a good relationship with your anger. Immediately, your shame will fall into disarray as well — because they’re linked abilities — so you’ll not only be unsafe from attacks to your self-image and self-esteem, but people around you will be unsafe as well. Without your anger, you won’t be able to set firm and appropriate boundaries, which means that everything will get to you, and you’ll take it personally. Even if people around you are behaving normally and appropriately, your lack of boundaries will leave you exposed and hypersensitive. A sideways look, a bad joke, a cranky colleague, or a set of rules that seem pointless will loom up and threaten to crush you. And sadly, you’ll lash out.

But here’s the kicker: If you’re anger-impaired and dealing with severe boundary loss, which means you feel unsafe at all times, you won’t be able to lash out in ways that are direct or honest. You won’t be able to question the sideways look or the bad joke, and you won’t have the resilience you need to tolerate a cranky colleague or pointless rules. Everything will feel like a direct attack, not only on your self-esteem, but on your survival as an individual.

And now, sadness (see The Gifts of Sadness) will come forward because you’re losing something important (your sense of self), and fear (which you feel when there are threats to your physical survival and health) will come forward to help save your life. Doh!

And because your healthy sense of shame has been toppled by your troubled relationship with anger, you won’t have any brakes on your behavior. Your fear will tell you to lash out and protect yourself — as if your physical life is in actual danger — but you won’t have the sense of ethics that shame and anger bring you, so, oops, you’ll hurt people. Your fear will give you great instincts about the weaknesses of others, and you’ll exploit them because you feel endangered. Your sadness will also help you let go of things, but without your anger to set boundaries, you’ll let go of things like your sense of responsibility to others, your capacity to love and connect to people, and your contentment, which arises when you feel proud of yourself (you won’t have the peace of mind that leads to healthy pride if you’re continually defending yourself from attack!).

This is why I place so much emphasis on anger. If it’s broken, a domino effect will topple everything around it; problems with anger will knock out your shame, your fear, your sadness, and your contentment. Happiness and joy are unlikely, you’ll probably wrestle with jealousy and envy, you’ll kick your depression into high gear, and yow! What a mess! 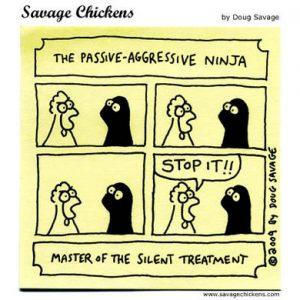 Dealing with Passive Aggression in Yourself

Okay, this is easy. Get back in touch with your anger and shame! Read the book, get all your emotions back into their correct relationships, burn your contracts with old behaviors (passive aggression is learned in childhood, usually in chaotic or abusive families, so the five empathic skills in the book will be lifesavers), and voila! You can go out and play nice!

Dealing with Passive Aggression in Others

Okay, those are my ideas right now! Have you found healthy ways to work with the boundary-impaired and passive-aggressive people in your life?