The Darkness before Dawn: Understanding the Suicidal Urge 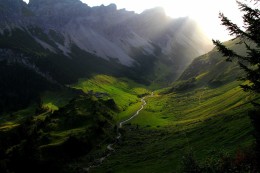 When famous people commit suicide, and breathless news reports glorify or confuse the situation, there is the danger that others will follow his or her lead. Careful reporting can reduce this risk, and providing straightforward information about depression and suicide can help suffering people find help.

If you are feeling suicidal here in the U.S., you can call the National Suicide Prevention Lifeline at 1-800-273-TALK (8255). Suicidal feelings can be very isolating, and this lifeline exists to give people the support they need to make it through the despairing periods in their lives. If you or anyone you know is feeling suicidal, please let them know that support and help are available immediately. You’re not alone.

The TALK lifeline is available in the U.S.; if you’re in another country, the International Association for Suicide Prevention has a list of crisis centers and suicide prevention centers throughout the world. Please reach out if you’re in pain.

Suicidal feelings have a range from soft to intense, but if you are feeling any level of suicidal urges right now, don’t feel as if you have to wait until you’re in the throes of torment to reach out for help.

If you can learn to catch your suicidal urges when they’re in the soft stage, you can often stop yourself from falling into the pit of desperation and torment. This post on working with depression may be helpful.

In the territory of the suicidal urge, your capacity for emotional awareness and articulation can literally save your life. Here is some vocabulary that may help you catch your suicidal urges before they become very intense. This list below is a part of my Emotional Vocabulary List, which you can download for free here.

Please remember: when people are feeling suicidal, they’re not having a simple happiness deficiency or exhibiting a character flaw. Something very serious is going on.

If you don’t know what to do, you can call the Lifeline suicide hotline as a concerned friend (1-800-273-TALK (8255), and they’ll help you understand what to do. Here are some ideas from the Lifeline website:

How To Be Helpful to Someone Who Is Threatening Suicide

Be direct. Talk openly and matter-of-factly about suicide.
Be willing to listen. Allow expressions of feelings. Accept the feelings.
Be non-judgmental.
Don’t debate whether suicide is right or wrong, or whether feelings are good or bad.
Don’t lecture on the value of life.
Get involved. Become available. Show interest and support.
Don’t dare him or her to do it.
Don’t act shocked. This will put distance between you.
Don’t be sworn to secrecy. Seek support.
Offer hope that alternatives are available but do not offer glib reassurance.
Take action. Remove means, such as guns or stockpiled pills.
Get help from persons or agencies specializing in crisis intervention and suicide prevention.

Thank you for helping when people are feeling suicidal. Thank you for your emotional fluency and your willingness to reach out when others are in need. You make a difference.

(From SAVE. Learn more at SAVE: Suicide Awareness Voices of Education)

1) People who talk about suicide won’t really do it.

Not True. Almost everyone who commits or attempts suicide has given some clue or warning. Do not ignore suicide threats. Statements like “you’ll be sorry when I’m dead,” “I can’t see any way out,” — no matter how casually or jokingly said, may indicate serious suicidal feelings.

2) Anyone who tries to kill him/herself must be crazy.

Not True. Most suicidal people are not psychotic or insane. They may be upset, grief-stricken, depressed or despairing, but extreme distress and emotional pain are often signs of mental illness and are not signs of psychosis.

3) If a person is determined to kill him/herself, nothing is going to stop him/her.

Not True. Even the most severely depressed person has mixed feelings about death, and most waver until the very last moment between wanting to live and wanting to die. Most suicidal people do not want to die; they want the pain to stop. The impulse to end it all, however overpowering, does not last forever.

4) People who commit suicide are people who were unwilling to seek help.

Not True. Studies of suicide victims have shown that more than half had sought medical help within six months before their death and a majority had seen a medical professional within 1 month of death.

5) Talking about suicide may give someone the idea.

Not True. You don’t give a suicidal person morbid ideas by talking about suicide. The opposite is true — bringing up the subject of suicide and discussing it openly is one of the most helpful things you can do.

The World Health Organization also has information on suicide in countries throughout the world, and numerous links to help you learn more.

Suicidal feelings can affect anyone, from kids to elders. Let your friends and family know that you’re willing to talk about suicide; you may save someone’s life, certainly, but you’ll also make life easier and less awful for people who are suffering.

Thank you for making the world more empathic and compassionate.

Welcoming all of your emotions! Anger can be the most honorable emotion you have, if...